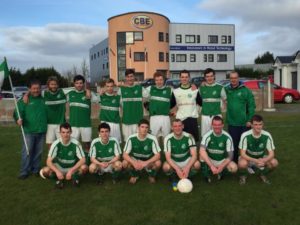 A superb lesson in finishing by Dean Roddy in the first half of this afternoons match set up a memorable win for Claremorris Junior team away to Erris. Dean struck four times within the first 45mins, leaving the half time score at 4-1.

In the second half, against a very strong wind, the team had to dig in to grind out a 6-4 victory, with further goals from Simon Butler (pen) andHubert Kowalski. Our first points in the Super League were well earned and deserved. Next up Westaro Cup action away to Castlebar Celtic.